This had a very positive review in either Booklist or Library Journal. The author was in a screenwriting class at some Ivy League school and decided to write about hockey. She was from the South, knew jack-all about, hockey, started hanging out with the hockey team, ended up loving hockey.

Story: Dude from the South takes up hockey after training several years as a figure skater. Dude is such a sharp skater that he earns a hockey scholarship to a school in the Northeast.. He has a few ups and downs over his first two years.

Eric "Bittie" Bittle is smaller guy who loves to cook and vlog. The story begins as a monologue addressed at Bittie's laptop camera. He has just moved into his dorm for August hockey training. Over time he becomes close friends with his teammates, tells everyone he is gay, tries to overcome an intense fear of checking (he is a small guy who does not want a 250 lbs. bruiser whacking him into the boards), and anxious about traveling on his own from AL to the WhereEver.

The comic book novel compilation follows Bittie's first two years of school. Bittie has no love interest but deeply admire the Quebecois team captain who who is the son of a NHL All Star. Captain was a hockey wunderkind until a drug habit derailed him when he was 18. He has become a college star and will soon head to the NHL.

Meanwhile the rest of the team can be described as "woke boozehounds". The team is very much dedicated to both booze and enthusiastic student themes of equality. It is an odd mix at times. Their team hazing is to take have new guys wear their underwear out to center ice and told to prepare for Hazeapalooza. No one takes it seriously. Bittie brings pie to the event and they all end up arguing before going home.

This is a fun book. The artwork is bright with big-eyed happy characters. The conflict is Bittie overcoming nerves, striving to improve his hockey skills, wishing for love affairs, and finding out Captain is gay and into him. 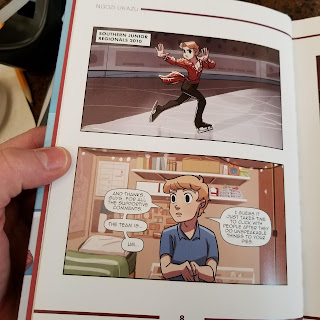 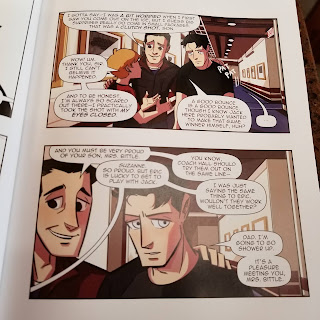 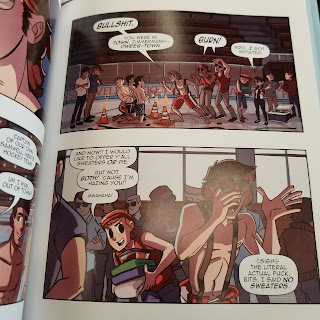 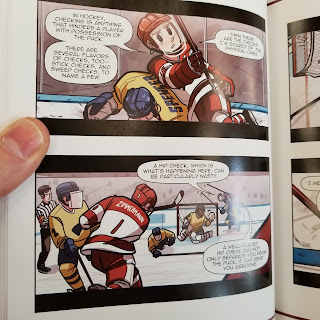 Posted by Gerard Saylor at 9:47 AM